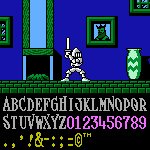 recreation of the large pixel font from zippo games/rare/acclaim's wizards & warriors III: kuros: visions of power (1992) on the NES.

note that the & character is wider than 8px - in the game, it uses 4 separate 8×8 tiles. in this recreation, the character width is nonetheless set to 8px, with the ampersand overlapping the following letter (usually, a space character) by one pixel.