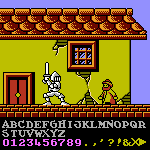 recreation of the pixel font from zippo games/rare/acclaim's wizards & warriors III: kuros: visions of power (1992) on the NES.

very similar to the font used in ironsword: wizards & warriors II (1989), but with a subtly modified Q, and different punctuation and numbers.