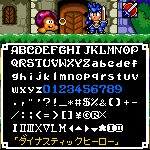 recreation of the pixel font from hudson soft's the dynastic hero (1993) on the pc engine – a remake/rebrand of westone's wonder boy in monster world (1991).

the font includes an almost complete set of hiragana and katakana characters. in the tile set, the dakuten and handakuten are separate tiles, positioned vertically above their respective character. in this recreation, characters that use them are pre-combined into a single glyph.