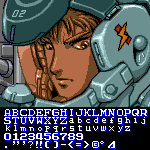 recreation of the pixel font from naxat/compile's spriggan mark 2: re-terraform project (1992) on the pc engine.

this font, used in the game's options screen, is mostly the same as the font used in the first spriggan (1991), but it adds a whole new lowercase (though it has an oddly mismatched baseline) and replaces some of the punctuation characters.

note the addition of the stylised A - which doesn't seem to be used in-game, but is likely a remnant/carry-over from compile's aleste (1988) - mapped to greek capital letter alpha (U+0391).