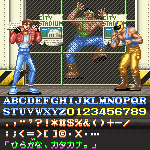 recreation of the main pixel font from jaleco's rival turf! (aka rushing beat, 1992) on the SNES.

this font is used for the main menu, intro/outro cinematics, and end credits.

the font includes an almost complete set of hiragana and katakana characters. a few of the katakana characters were missing in the game's tile set, so I've attempted to include custom characters in a similar style. in the tile set, the dakuten and handakuten are separate tiles, positioned in a line above their respective character. in this recreation, characters that use them are pre-combined into a single glyph.

with the exception of the few additional katakana glyphs, only the characters present in the game's tile set have been included.