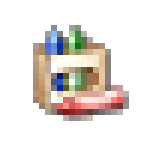 blame it on malarkey's question over at the accessify forums

I would like to ask specifically which browsers support Longdesc and which don't.

which prompted my reply

if by "support" you mean "make easily accessible to the user", then i think the answer would be none of the mainstream ones. i've been playing with the idea of writing a Firefox extension to add "view long description" to the image context menu for quite a while...just need to find the time to sit down and play around with XUL and stuff a bit more...

well, six hours later, here's my first ever firefox extension. after installing, it adds a "View Image Longdesc: ..." option to the browser's image context menu. as this is still version 0.1 there may be bugs lurking ... however initial testing gave me thoroughly positive results.