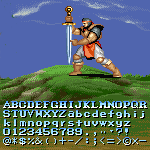 knights of the round font

recreation of the "glory form" of capcom's classic pixel font which first appeared in knights of the round (1991) and has since - with a few exceptions and tweaks - been used in a large number of titles (often in combination with additional fonts, or just on the arcade boot-up / warning / Q-Sound screens) including street fighter II, warriors of fate, dungeons & dragons: tower of doom, x-men: children of the atom, dungeons & dragons: shadow over mystara.

only the characters present in the game ROM have been included.