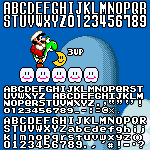 nintendo's super mario world (1990) on the SNES contains a maddening 5 pixel fonts. this set contains recreations of the four most prominent ones (as the fifth only seems to have been used for the "MARIO/LUIGI START !" and "GAME OVER" screens).

update: in the game, the fonts have a 2px spacing to account for their outlines. in this recreation, i opted to just go for a 1px spacing - if you do use them outlined, make sure to add the extra pixel for authenticity.